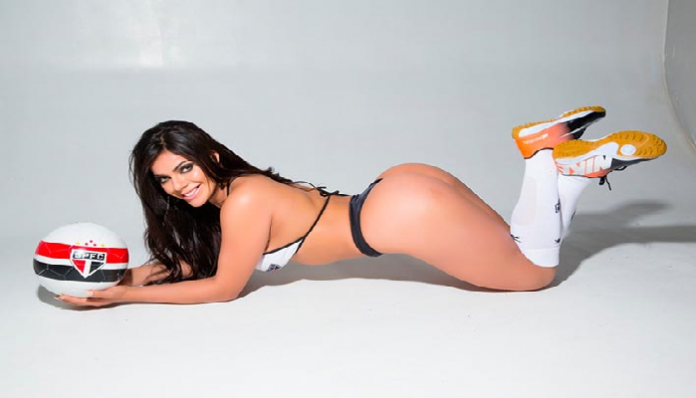 Suzy Cortez is a famous Brazillian model born on 16th May 1990. Her age is 31 years as of the year 2021. She is a Brazilian national since birth and was born to her parents in Campinas, State of Sao Paulo. She is known to be a bold and beautiful Brazilian model and a fitness freak. She is also a popular TV personality, a social media influencer and a businesswoman.

She has won many beauty pageants and modelling competitions including many national and international awards in her modelling career. In 2015, she became famous by winning the title of Miss BumBum which is is an annual beauty pageant organised in Brazil to reward the owner of the best buttocks in the country.

She grew to fame after winning this title and was offered many modelling assignments in the subsequent years. She also won the “Miss World Butt” title as a fitness model after which there was no stopping her to rise as the shinning star of the modelling industry. She was featured on the front cover of the world-famous American men’s lifestyle and entertainment magazine Playboy. Ever since she has done many photoshoots for Playboy.

Less is known about the exact place she grew up and how she has spent her childhood years. She is a very private person and has never revealed anything about her parents or siblings. The details about her education or schools/colleges are also unknown. The only details that are available about her personal life and family are that she was born in Campinas, State of Sao Paulo.

Suzy Cortez used to hang out with the Russian president Vladimir Putin. She met him during her visit to Russia for Football World Cup 2018 event. The Brazilian model recently called him a ‘violent psychopath” because of the war Putin has started with Ukraine. She stated her visit to Russia was a  ‘traumatic’ experience as she would feel insecure all the time.

She recalled her dinner visit with Putin and recalled how he squeezed her hand and she felt very unforgettable for the way he kept looking at her throughout the event. During the event, he would say things to his secretary and then the secretary would come and say them to me.

The president invited her to visit Russia anytime and once when she had come to Russia she booked Uber to visit Moscow. But when Putin arrived he sent his government car to take me wherever I wanted. She said she is not sure whether he was being protective or wanted to keep a watch on her. She stayed only for a week and rushed back to Brazil.

If we look into the personal life of Suzy Cortez, she is often surrounded by some controversy. She once revealed that she was thrown out from one of the Airbnb she had rented for her vacation only because of the reason that she was steamingly hot for the owner of the property. The owner declared that people were getting in trouble because of her good looks. Suzy Cortez declared that the host suffers from “hot girl phobia” and she would sue Airbnb and the host for the embarrassment and psychological pain she had experienced because of their actions.

It is obvious that Suzy is from Brazil, so football is settled in her soul. Suzy Cortez took her love for football player and Argentine striker Lionel Messi to the next level by having his Barcelona kit painted onto her naked body. She is often seen wearing her favourite footballers’ jersey with his number in various photoshoots. She once declared that Lionel Messi and his wife have blocked her on Instagram because of her semi-naked pictures in Barcelona jerseys. She also said that Messi’s wife was jealous of her being a fan of his husband.

Suzy Cortez just cannot have enough of FC Lionel Messi. When his other fans were celebrating his Ballon d’Or 2021 win, Suzy celebrated his success in her signature style by posting a number of NSFW photos online. She also kept her promise by posting a naked picture in public to declare herself as the greatest fan of the Argentinian football player.

Before winning the title of Miss BumBum in 2019, Suzy had already made a sensation with her topless photoshoot that created ripples on various social media platforms. She is often seen posting hot and steamy poses of her in pictures on Instagram. She also tweets regularly to keep her followers entertained and interested in her.

You will have all the information related to Suzy Cortez on this page including her wiki-bio, recent updates, controversies, social media posts, events, Modelling, body measurements, height, weight, age, birthplace, parents, siblings, net worth, boyfriends, husband,  television, hobbies, football, Instagram posts, Twitter updates. We keep updating this page regularly to serve you with the latest information on this Brazilian Model’s life.